A few weeks ago, I was interviewed for an episode of The Inspire Cafe Podcast. The interviewed has just been released.

“Author Gabrielle Bergan talks about her memoir, Return to My Soul: My Journey from Darkness into the Light.  She shares her years of struggle, including depression, an attempt at suicide, and her former belief that something was wrong with her.  She explains she believes a part of it had to do with her relationship with her parents, stemming all the way back to the day she was born.  Because of complications during her delivery, Gabrielle was put in an incubator for a week before she was even placed in her mother’s arms. They therefore never bonded as mother and daughter.  It wasn’t until her mother was 81 and she was 58 that they spoke about it and finally cultivated the mother-daughter relationship Gabrielle longed for.  This is a story of it’s never too late.” 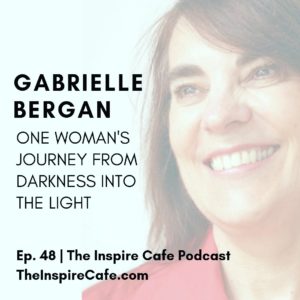 I´m an author who writes about enlightenment and the soul